During Dionisio I period, Siracusa was one of the biggest and powerful cities in Mediterranean area, because of its temples and palaces, gardens and fountains, its richness of money, culture and power. For Plato it was the perfect city which can influence the change in politic and in society. A wonderful city for Simonide, Pindaro, Bacchilide and Eschilo. A military powerful city, able to keep in check Cartagine and Athens. Siracusa was founded in 734 b. C. by Corinth colonists, who were inspired for the city name to the near swamp Syraka. During the V century, Siracusa influenced all the Mediterranean area and many events were linked to this city, like the defeat of Carthaginian in Imera in 480 a. C.; the Etruscan defeat in Cuma in 474, that blocked its development in south area; the victory against the Athenian in 413, during one of the biggest naval conflict. Only around 212 b. C., the Romans succeeded to conquer the city with tricks, even if it was defended by the Archimede actions. Despite the city decline, Siracusa was always the most important Sicilian city, so that the Imperator Costante II did of it the capital of the whole Oriental Empire. After the Arabian conquer, in 878, it became its slow failure, becoming the quite and silent today city, proud of its past history.

The magnificent cavea of the Siracusan Greek Theatre is the maximum expression of ancient theatrical architecture which reached us. Many theatrical passionate people will be astonished in front of its majesty, not forgetting that Siracusa was one of the biggest theatrical centre in the world, where born the comedy, like the tragedy in Athens. We have news about it dated back to the V century b. C., because the Greek author Epicarno, lived and worked there, under the Gelone Kingdom. Four years later, in 476, Eschilo played there his “Persians” and “Le Etnee”. The Greek theatre was not only the place in which to act comic or dramatic plays, but it was also the scenery for popular meetings and trials. With the end of Hellenic and Roman age, it was abandoned and then discovered again in 1526 by the Spanish people of Charles V. The archaeological site and the restorative measures started in 1804 and interrupted many times, were completed in 1954.
The theatre has a diameter of 138 metres (the biggest in Sicily and one of the biggest in the world) and it has a gap of about 19 metres between orchestra pit and the higher step. At the beginning, the cavea has 59 sits order, divided in 8 little staircases; only the higher steps are made up of big blocks, while the lower ones are excavated in the rock. The semi-circular orchestra space was about 21 metres. Before the scene there were the Caronte staircases, which were used just for evocative and brief appearances and, in the upper part there is the Ninfeo cave, inside of it flows the river Anapo e where probably the actors stayed.

It has a millennial history. In every part, in every street like in every monument, we can keep past testimony. Ortigia shows us all the eras that underwent: Greeks, Romans, Byzantines, Arabians, Normans, Svevis, Argons, Catalans, Vicerè, Savoia imprinted unique traces and they wrote unforgettable pages of this historical book art which is waiting for being read from all the world. To its attentive visitors, Ortigia will show its several monuments that makes it a rare jewel.

It is fronted in the Cathedral Square and surrounded by several baroque buildings. The cathedral is the final result of the transformations during the time about the Athena temple, desired maybe from Diomenidi, the Gelone ancestry, who was the first arethusan tyrant. The temple was peripteral hexastyle, with 36 columns, 9 metres high and with a diameter about 2 metres. It was celebrated by Cicerone. The doors’ temple were in gold and ivory materials and on the top there was the Athena gold shield. Around VII century it became a Christian church and then a cathedral. The front is enriched by Corinth columns and statues. Inside it has three aisles. It has several works art, like the San Cosimo gold table, made by Antonello da Messina, in Cross Chapel; the Madonna della Neve statue in left apsis, which comes from the Byzantine church; the majestic major baroque altar, with a table made up of a monolithic block from the Athena temple trabeation.

In Ortigia Island, we can find a place in which myth and reality meet each other: the Aretusa fountain.
It is in old Siracusa area, surrounded by the green papyrus. This source reaches Ortigia via subterranean and then it gushes in the sea, which is very closed, by creating a little lake full of fishes and ducks.
According to the mythology, Aretusa was one of Diana nymph. During the hunting, the girl moved far from the group and went till Alfeo river, which was very crystal. It was very hot so she decided to go swimming in it. Aretusa was sure that no one saw her, so she decided to remove her dresses. Suddenly the water started to shake, she tried to reach the shore but she was blocked from the Alfeo river in human image: he was beautiful, with blond hair and very fall in love. But Aretusa rejected his love. She was afraid, so she asked an help to Diana, who firstly enveloped her in a dark cloud and then she converted her in a fountain in Ortigia. But Alfeo doesn’t accept it and Jupiter, with compassion, changed him again on a river, in order to stay next to her sweet darling.
Aretusa fountain is called also “a funtana re papiri”.
Beyond the legend, it is a magic place in which you can walk and delight of a spectacular sunset.

Absorbed today by a military base, it was built in 1239 by Federico II hook. The castle has both a military architecture and an elegant court and it has a III century external structure, with a squared map and big corner towers. The main gate is in Gothic marble style.

We can find the ruins of this temple in Largo XXV Luglio in Ortigia. It is the oldest of the Greek temples in Sicily, because it dated back to the VII century. During the centuries it changed in Byzantine church, then in Mosque and in Christian cathedral. It was a Doric temple and it presents archaism peculiarities. 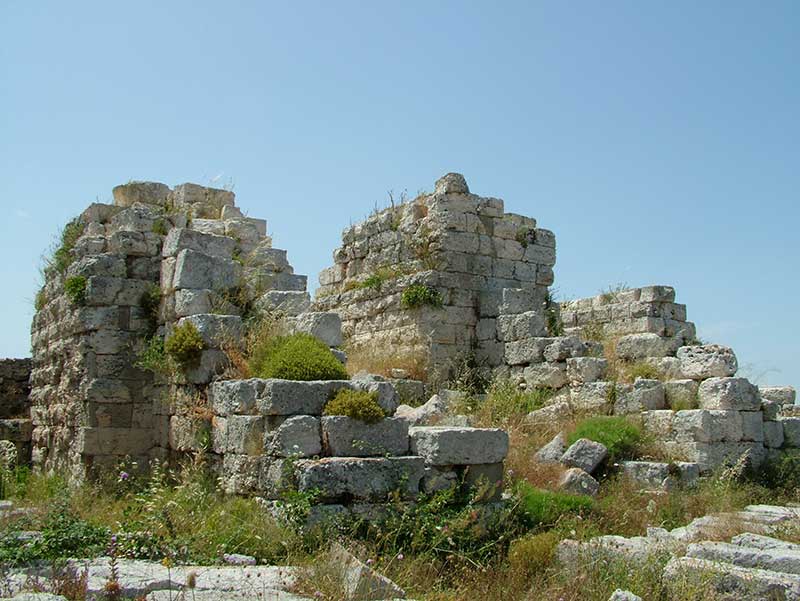 It is a 15 000 square metre fortress, which linked the Siracusa wall from the north till the South of the whole city. It was many times modified just to adopt it to the military needs. The big Eurvelos fortress, was protected, in West side, by three big trenches. The third of it, was linked with a defensive system, made up of galleries and passages, by summing in total 480 metres, plus five towers 15 metres high.

They were the quarries from where were extracted all the materials just to amplify the Siracusa urban map. The most evocative is the Paradiso Latomia, immersed in a luxury garden.

In Necropolis we can find the famous “Dionisio Ear”, a big artificial cave, in which we can notice an extraordinary amplified acoustic effect. We know that the dictator who named the cave, seated in a crack on the top of it, listened every word pronounced by the prisoners incarcerated inside.

Very next to it, we will find the “Grotta dei Cordari”, named in this way because inside there were rope makers. Then, there are other little latomie, like Intagliatella and S. Venera.
In Latomie, to serve hard labour, there were the 7000 surviving Athenians militaries beats by the siracusan one in 413 b. C. We know that someone of them was release if they acted Euripides verse, but the majority of them died there.