Cefalù is an Italian town of 14.323 citizens, in Palermo district.

It is in northern Sicilian cost, around 70 km far from Palermo, on the foot of a rocky promontory. It is one of the main beach center in the whole region; in spite of its dimension, every year it hosts a lot of local, national and foreigners tourists, which, during summer time, overcrowded the main squares and streets of the city.
The city, which is part of Madonie Park, is included in I Borghi più belli d’Italia club, the association of italian little villages which are rich in art, culture and history, which has an harmonious urban map, services and that are livable. Cefalù is one of the supportive town.
Its Cathedral is UNESCO heritage since 2015, insert in Palermo Arab-Norman and Cefalù Cathedrals list.

The city, in its medieval nucleus, is placed under the Cefalù fortress which characterizes its uniqueness. Outside the confines of the historic center, the urban nucleus has spread out over the small flat area that separates the fortress from the rest of the hilly coastline, further expanding halfway up the hillsides along the coast.
The coast of Cefalù stretches for about 30 km between Lascari and Pollinaed alternates long stretches of straight beach with bays and small inlets of both sandy and rocky nature with low cliffs or even with high ridges and overhanging the sea. The coast undergoes a wave erosion on both the sandy stretches, such as the well-known beach of the town, and on the rocky ridges of a quartzarenitic nature. Some areas such as the old port (in the historic center) and the new port are instead subject to the opposite phenomenon, the sedimentation, due to the detritus brought by the small rivers that descend from the Rocca and the hills near the coast. To combat erosion over the years have been prepared works of defense of the coast, such as the barriers breakwater, in contrada Kalura (183 km of the SS 113 and in the district Mazzaforno.
Close to the coast, after a very short strip of land, sometimes nothing, high hills overlook the first offshoots of the Madonie mountain system. In this area the ground climbs gently or suddenly from north to south towards the land and the common Madonites alternating a series of hills gradually higher in view of the major reliefs Madoniti.

Traces of frequentation of the site date back to prehistoric times, in particular in two caves that open on the northern side of the promontory on which the city was built. A pre-Hellenic settlement refers to the megalithic-type walls, dated at the end of the V century b.C., which surrounds the present historical center and is still largely preserved, and the contemporary Temple of Diana, a sanctuary consisting of a megalithic building, covered with stone slabs of the dolmenic type that houses a previous older cistern (IX century b.C.).
In the IV century b.C. the Greeks gave the indigenous center the name of Κεφαλοίδιον (Kefaloidion), from the Greek kefa or kefalé, or “head”; probably referred to its promontory. However, we can not exclude the phonetic resumption from Aramaic (a Canaanite language closely related to the Phoenician) kephas (“stone, rock”), therefore always referring to the promontory.
In 307 b.C. it was conquered by the Syracusans and in 254 b.C. from the Romans, who gave it the name Cephaloedium in Latin. The Hellenistic-Roman city had a regular urban structure, formed by secondary roads that converged on the main road axis and closed in a ring by a road that follows the perimeter of the walls.
In the period of Byzantine domination the village moved from the plain to the fortress and traces of fortifications of this era remain (crenellated walls), as well as churches, barracks, cisterns for water and ovens. However, the old city was not completely abandoned, as evidenced by the recent discovery of a building of Christian worship, with a polychrome mosaic floor dating back to the VI century.
In 858, after a long siege, it was conquered by the Arabs, who gave it the name of Gafludi, and was part of the Palermo emirate. Of this period, however, there is little and fragmentary news and there are also no monumental testimonies.
In 1063 it was conquered by the Normans of Roger I and, in 1131, thanks to Roger II, was reoccupied the ancient village on the coast, respecting the pre-existing urban structure: to this period date back several of the city’s monuments, such as:

Precisely in 1131, the cathedral basilica is particularly dated.
Between the mid-XIII century and 1451 it passed under the dominion of several feudal lords and finally became a possession of the Cefalù bishop.
The subsequent history of Cefalù can be assimilated to that of Sicily and the rest of Italy. In 1752 it began to establish foreign consulates (France, Denmark, the Netherlands, Norway and Sweden) and the city became a destination for the Grand Tour. During the Risorgimento, the patriot Salvatore Spinuzza was shot there on 14th March 1857. After the landing of Giuseppe Garibaldi in January 1861, the city proclaimed its adhesion to the Italy Kingdom.
Today it is a seaside resort and a tourist destination for its beaches and the works of art it preserves.

Monuments and places of interest

The historic city center in Cefalù, has a medieval map with narrow streets, paved with sandy pebbles and the limestone Cefalù Rocca.

The Palermo Arab-Norman and the Cefalù and Monreale Cathedrals, since 2015 were declared UNESCO heritage.

According to the legend, the Cefalù Cathedral would rise following the vote made to the Santissimo Salvatore by Ruggero II, who escaped a storm and landed on the beaches of the town. The real motivation seems rather political-military, given its character of fortitude.
The construction events were complex, with considerable variations compared to the initial project, and the building was never completed definitively. The laying of the first stone took place on the Pentecost day in 1131 at the presence of Ugone Messina archbishop to whom the reconstituted Diocese of Cefalù was suffragan and in 1145 the mosaics in the apse were made by Byzantine labor and the sarcophagus were placed in porphyry that Roger II had intended for his and his wife’s burial, then stolen by Frederick II taking advantage of a temporary absence of the then bishop of Cefalù Jocelmo and taken to Palermo where they are still today. Attached to the cathedral there is an elegant cloister with twin columns surmounted by figured capitals, among the most notable examples of medieval sculpture in Sicily.
Since 3rd July 2015 it is part of the UNESCO World Heritage within the “Arab-Norman itinerary of Palermo, Cefalù and Monreale”. 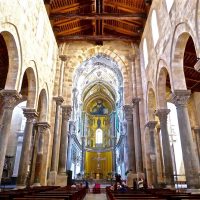 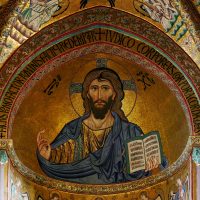 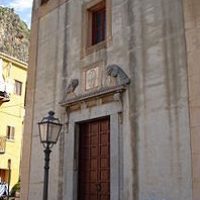 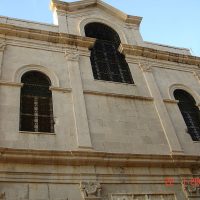 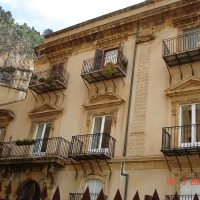 It was founded on Via Mandralisca in 1703 by the bishop Matteo Muscella. It has a gray stone façade, with a baroque lumachella stone portal. On the second floor are still preserved the XVIII century furnishings and a safe that served to keep the most precious items deposited. 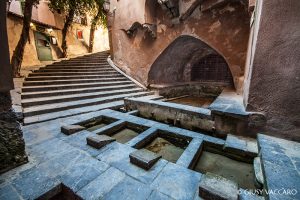 In Via Vittorio Emanuele there is the public wash house known as the medieval Lavatoio, near the late Renaissance Palazzo Martino. In 1514 it was demolished and rebuilt in a more backward position compared to the city walls and the river that flowed in the open air was covered in the XVII century. In 1991 summer the restoration work was completed.

The wash house has a lava stone and lumachella staircase leading to a smoothed paving by the time and a series of pools that are filled with the waters that flow from twenty-two cast iron mouths (of which fifteen lion heads) arranged along the walls dominated by low vaults. Through a small antrum, the water reaches the sea. In the tanks the supports that were used to rub the clothes are evident. 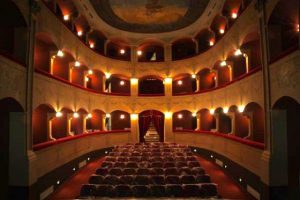 It is located in Via Spinuzza, owned by the barons of Bordonaro, it had a troubled history: closed and reopened several times, it was even used as a hospital for a plague epidemic. Since the 1920s it has also been used as a cinema. It was abandoned in the 80s and passed into the ownership of the Municipality that started the recent restoration works. It is now named to the Maestro Salvatore Cicero, musician and first violin of the Sicilian Symphony Orchestra.

The hall has three tiers of stages. It preserves a pictorial decoration of 1885 by Rosario Spagnolo (ceiling painting, backdrops and curtain).