The regional parks are today an efficient reality both for the protection of delicate ecosystems, and for the tourist, sporting and educational enhancement of mountain areas. Those Sicilian are four in order of institution: the Etna Park (Catania), the Madonie (Palermo), that of Nebrodi (Catania, Enna and Messina) and, the last born, the Alcantara Fluvial Park (Messina and Catania). The latter is certainly a natural system of almost primitive beauty, where the landscape is shaped by the encounter between water and fire, with the river that digs and meets the hot lava, creating large stone architectures: gorges, smooth walls, jumps of water, smooth and squared stone blocks. If the Alcantara is characterized by the fluvial vegetation (with the eastern platan and the white willow, endemic species that along the banks, a few meters from the water, are mixed with citrus fruits and prickly pears), the Etna Park, with its orography marked by lava eruptions, is a true botanical garden. The largest active volcano – with its 3,300 meters is the highest in Europe – presents the north face covered with a thick blanket of snow for most of the winter, and the large forests of birches or beech trees paint an unusual Nordic landscape to little distance from the sea.

The Nebrodi Park winds along the Tyrrhenian coast, embracing the green Sicily with immense spaces, with extensive forests and forests where they resist ancient traditions related to the work of the land, weaving, breeding and the use of cultures handed down by shepherds, charcoal burners, horse breeders, ceramics artisans.

The Madonie constitute a true natural microcosm where all the Mediterranean plant species are represented, with exemplars elsewhere disappeared, botanical relics of the last glaciation like the Abies nebrodensis, in an environment of extraordinary beauty punctuated by rare wild orchids. Among the protected rarities are also 90 species of butterflies, some endemic. In the park area there are several medieval villages that offer the visitor an inestimable historical-artistic heritage.

The beauty of the Etna Park lies not only in the grandeur of the eruptions and in the incandescent lava flows. Around the great volcano there is a unique and incomparable environment, full of sounds, scents and colors.

The territory of this park includes the highest mountains of Sicily – except, of course, for the volcanic apparatus of Etna. Visit the wide Madonie area is certainly a unique experience.

This mountain chain, part of the Sicilian Apennines (also formed by Madonie and Peloritani), extends for about 70 km parallel to the northern coast of the island.

The charm, the call of the “Gorges”, famous all over the world. Approximately 50 km of fluvial boom, with unique naturalistic aspects. Geological and geothermal events of considerable intensity have determined the structure of the current basalts.

There are 77 green pearls of Sicily, nature reserves where the Mediterranean landscape, whether hilly, marsh or mountain, has been minimally tampered by man and his activities. Real beauty oasis open to tourists’ use 365 days a year thanks to the management system entrusted to public bodies – such as the State Forestry Company which manages the Malabotta Forest (Messina), Provinces or Municipalities such as the Province of Ragusa which manages the Irminio river reserve – or environmental associations – such as Legambiente, Italia Nostra and WWF, which manages the Capo Rama reserve in Terrasini (Palermo). The first to be established have made the history of Sicilian environmentalism. Here then we talk about the Zingaro, with its wild coastline and the rare Mediterranean vegetation of dwarf palm, the ancient tonnara and the faraglioni. Today the Sicilian reserves are real natural laboratories where the protection of flora, fauna, archaeological and anthropic landscape is combined with didactic and experimentation activities. The example of the Isola dei Conigli of Lampedusa in the archipelago of the Pelagie (Agrigento) is an example, where every summer the fields of protection of the Caretta Caretta turtle are organized, which on the white sand has returned to deposit its eggs. In Pantelleria (Trapani) for some years – in addition to protecting the archaeological sites and typical houses (the dammusi) – is back the Pantelleria donkey, practically extinct but ‘reassembled’ thanks to the work of researchers; while in Vendicari – near Noto (Syracuse) – exotic birds continue to winter, and they stop in this habitat among fresh water, lake vegetation and the sea while they travel on the routes to Africa. Unique because of its landscape impact and the size of the necropolis (more than 5,000 tombs), it is the Pantalica Reserve in the Anapo Valley (Syracuse). Over the centuries the river has carved its bed in the limestone of the Hyblaean highlands, opening deep canyons in the midst of a wild river vegetation. And still extraordinary are the Stagnone reserve in Marsala (Trapani) and the reserve of Trapani and Paceco in which salt pans, windmills and nature are combined in a succession of colors and scenarios that, especially at sunset, leave you speechless. 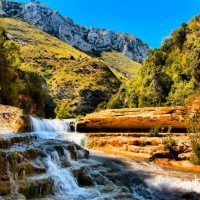