The Isole Eolie (Isuli Eoli in sicilian language), called also Isole Lipari, are an Italian archipelago which belong to Sicily. Administratively talking, they belong to Messina district and they are a very popular touristic destination: the Islands, in fact, attract more then 600.000 very year. The archipelago, in volcanic origin, is in Tyrrhenian sea, in the northern Sicilian cost. It has two active volcanos, Stromboli and Vulcano, more then other volcanic activities.
The isole Eolie arrange an archipelago with seven big islands and little islands and cliffs in sea. They are placed in sea in Y shape with the tip towards the West side; they are in Northern Sicily, in Tyrrhenian-Messina cost.

The seven islands are:

The islands take the name by Aeolus God (Àiolos, Αἴολος in Greek language), wind king. According to a greek mythology repaired on those islands and gave them the name, thanks to his reputation of wind trainer. He lived in Lipari and he predicted the weather conditions by seeing the cloud shapes puffed by the active volcano, probably Stromboli. Thanks to this ability, important for citizens of the islands, which were fishermen and needed to know the weather conditions, Aeolus became popular in the archipelago; based on a theory, from this a greek prince expert in cloudy previsions, fomented the Aeolus myth, who commanded the wind.
According to the myth, the name of the Lipari islands comes from King Liparo, mythical colonizer of the island, contemporary of Aeolus. According to Pliny, from the Greeks these islands were called Efestiadi (Hephaistiàdēs, Ἡφαιστιάδης or volcanoids) and consequently, from the Romans, together with Aeoliae and Lipari, Volcaniae. 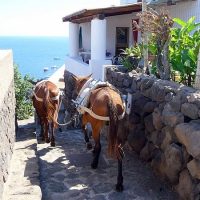 Donkey is also now a day a transport way in areas without roads, firstly in smaller islands. 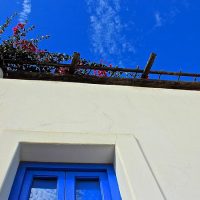 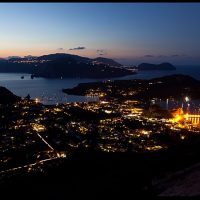 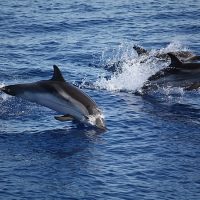 Daulphins between Panarea and Stromboli area 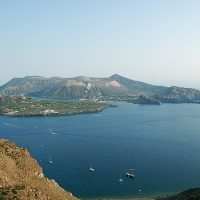 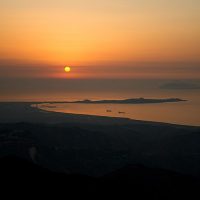 Patti and Milazzo Golf. On right side we will find Vulcano and Lipari.