10 historical landmarks to visit in Malta

Malta: an ancient country, not only a tourist maritime destination. Maltese islands have a wide historical heritage that goes back a few millennia b.C. to the present day.

Stunning museums, villas, houses and buildings, archaeological sites, hypogea, strong and ancient prisons: Malta suits all tastes and it is exciting both for those who love history, for those who wants to discovery its islands’ past and even for those who simply want to enrich their life with more culture.

This historical museum stands next to St. Paul parish church in Rabat. The building was commissioned by the Grand Master Aloph de Wignacourt at the beginning of XVII century in order to become the residence of the chaplains of the Knights of Malta.
The original building was completed only in 1749 and became a museum in recent times, in 1981. Afterwords, in 2012, it has been renewed and brought back to its original splendour.
The place where the museum has been built has a deep religious meaning, since in 60 A.D. St. Paul founded the first Christian community of the island in the underlying cave. In the underground there are also several labyrinthine Roman catacombs, whereas deeper down, there is a shelter system dug during the last war.

What to see at Wignacourt Museum

On the upper floor, there is a wide art gallery with pieces by several European masters of painting, such as Antoine Fairy, Francesco Zahra, Giuseppe Cali. Furthermore, visitors can admire historical vestments, heirlooms, sculptures, XVII and XIX century silverware, coins, maps and rare books.
On the ground floor, whose spacious courtyard serves as an art laboratory, there is a café. The museum has a baroque chapel too, which is used by the chaplains of the Knights of Malta.

This historical palace opened in Medina as a museum in 2007, after being restored. The whole building went through different historical periods: the ground floor dates back XIII century, with its thick walls, its ogive arches and windows. Some changes followed in XV century, when a floor was added on top.
The courtyard, considered one of the most beautiful of the island, is decorated with an ornate fountain and Sicilian Renaissance stairs.
Objects in this palace museum are not exposed in showcases, as you may expect, but as if they were in a lively place, with silver cutlery on the table and several photographies of Gollcher in the studio, the kitchen and the other furnished rooms.
The palace exposes antique French furniture, baroque paintings, jewelry.

The Palace is open from Tuesday to Sunday from 10:00 to 17:00 (last admission at 16:00). It is closed on Monday and on Christmas, First year’s Eve, Good Friday, Easter Sunday. The Palace is located in Villegaignon Street, Trip Il Villegaignon, Medina.

It is a XVI century building, which has been recently restored. It is not a museum like Palazzo Falson, but a private family house, combined with different architectural styles. Casa Bernard is a former Medieval watchtower, built on Roman foundations, then converted into a two-storey building in mid XVI century with following baroque additions. Still, Roman arches are to be found in the cellar, a part of which currently serves as a private chapel.
The barred-vaulted hallway let visitors access and visit the chapel, three drawing rooms, the dining room, the library and the main bedroom, embellished with furniture, painting and pieces of fine art.
Casa Bernard takes its name from Doc. Salvatore Bernard, a man of French origin who lived in the house, who was the personal physician of the Grand Master of Malta in 1723.

Casa Bernard is open from Monday to Saturday from 10:00 to 16:00. It is possible to plan further tours by appointment in the evening and on Sunday morning for groups of minimum 5 people. Casa Bernard is located in 46 Triq San Pawl, in Rabat.

Villa Bologna is a splendid countryside private house dating back XVIII century. It was built in 1745 by Fabrizio Grech as a wedding present for his daughter Maria Teresa Grech, who got married to Nicola Perdicomati Bologna (thus the name Villa Bologna).

What to see in Villa Bologna

The gardens went through two different phases in their realization, indeed they are now divided into an old garden and a new one. The old one is a baroque garden, located next to the XVIII century building. A document shows the year 1747.
It encloses a wide arboreal and floral variety, with statues dedicated to the four season all around the fountain. Close to the baroque gateway, there are two statues depicting Anthony and Cleopatra. There used to be the statues of Bacchus and Pan, however they have been damaged and are currently waiting to be restored.
It was Lady Strickland who decided to add the new garden in the ‘20s, with new fountains, vegetable gardens, citrus groves.

It was the Grand Master to donate the building, unused at the time, to Mons. Pietro Dusina (General Inquisitor and Apostolic Nuncio) in 1574 as his residence. The following 62 inquisitors amended it, up until the moment he was turned into a Roman Palace.
The Palace was built in 1530 and it was initially used as a Civil Court, called Castellania. In 1574 it became the inquisitor’s residence under the name Palazzo del Sant’Officio.

What to see at the Inquisitor’s Palace

The Palace hosts the National Museum of Ethnography, focused on religion’s influence on Maltese culture. There is, then, a permanent exhibition on Inquisition in Malta.
The several rooms of the Palace are open to the general public, including the inquisitor’s bedroom, the cellar, the courtyard, the prison courtyard and its jails, the courtroom, the guardhouse and the torture chamber.
Among all the peculiar memorabilia, visitors can admire the Inquisitor’s clothes, a magical hat with a spell in Arabic, magical Muslim sheets of paper and legal documents of the Inquisition, including the case of 40 witches in 1625.

This prison has been used starting from the mid XVI century until the beginning of XX century. It is located in Gozo, in front of the Cathedral Square, close to the Courts of Justice. The prison complex is divided into two sections: the entrance hall, used as a common cell in XIX century and a free-standing block with six individual cells.
Its walls show some graffiti drawn by the inmates: starts, ships, crosses and writings with names and dates. Its prisoners included aristocrats too, members of the Knights of St. John. Among its inmates, there used to be even Fra Jean Parisot de La Valette, who later on became Grand Master of Malta.

Located in the heart of the Maltese capital, this Palace became a UNESCO world heritage site and it is one of the first buildings built in La Valletta. It was commissioned by Grand Master Fra Pietro del Monte at the end of XVI century and then enlarged and embellished in the following centuries up until the mid XVIII century.
The interior includes a collection of 5.000 armors dating back between XVI and XVIII century (originally, there were 25.000 of them) and other weapons, such as muskets, guns, crossbows and swords.
It is possible to visit five rooms in the State Rooms, even they might be occasionally closed. The long Armoury Hall is decorated with tromp l’ceil, portraits, emblems, battle scenes and it leads to the Council Hall.
The Ambassador’s Hall is located beyond the Armoury Hall, where the Grand Master received important visitors and where the Maltese president still welcomes guests from abroad. Here hang the portaits of Louis XIV, Louis XV, Louis XVI, of the Russian empress Catherine II and of many Grand Masters.

What to find in the Grandmaster’s Palace

The only complete set of Gobelins tapestry in the world, dated back XVIII century.
A gallery of portraits of Maltese sovereigns, from the Knights of St. John to the present day.
Baroque illusionistic ceiling paintings of the late XVIII century.
A painting by Matteo Perez d’Aleccio describing in detail the Great Siege of Malta of 1565.

It is the only historical from in Malta open to the public and it was built in Newcastle by Sir William George Armstrong in 1878 for the gigantic Armstrong cannon, which, due to its 100 tons weight and 11 meters length, is the biggest loading cannon ever built.
Built on an irregular pentagonal base, it is surrounded by a deep moat.
It has an underground system and a ground floor with military billeting areas and machine rooms.
Fort Rinella offers guided tours, together with reenactments, a cinematographic spectacle on the Fort’s history and an exhibition on Queen Victoria’s army from 1837 to 1901.
Furthermore, the Fort safeguards 3.000 antiques, such as original weapons, uniforms and historical equipments.

The Fort is open from Tuesday to Sunday from 10:00 to 17:00 (Christmas, New Year’s Eve, Good Friday and Easter). It is located in St. Rocco Road, in Kalkara.

It is an archaeological site declared by Unesco World Heritage site, dating back to Neolithic and discovered in 1902. It is a well-preserved complex of catacombs carved into the rocks, with passages and stairs on three levels. The National Museum of Archaeology in La Valletta safeguards some evidences found in the hypogeum.
The most ancient evidences date back to 4.000 b.C. and the whole complex had been used for many centuries, up until 2.500 b.C.
On the upper level there is a big cavity with burial chambers on either side, and a door leading to the intermediate level with murals painted in red ochre. The deepest level of the hypogeum is known as the ‘Holy of Holies’.
The site worths a visit, because it represents the proof of a culture so far disappeared. Its murals are the most ancient of the Maltese islands.

The hypogeum is open from Monday to Sunday from 9:00 to 16:00. There are eight guided tours per day since, in order to preserve the site, there is a limit of 10 visitors per hour. It is located in Burial Street, in Paola. 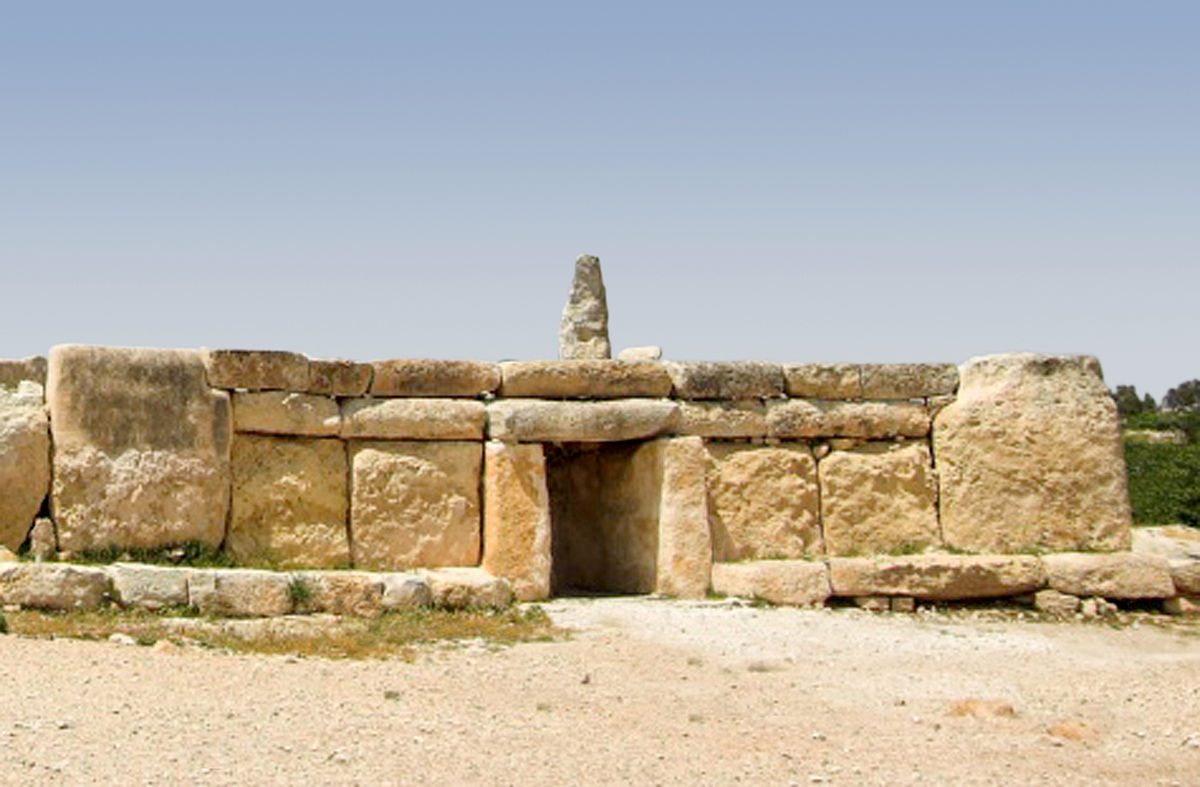 The prehistorical Hagar Sim temples are a Unesco World Heritage site too. It is a megalithic temple complex located on Malta Southern Coast discovered in 1839 and dates between 3600 b.C and 3200 b.C.
The façade is characterized by two vertical stones supporting an architrave. The three internal chambers are not placed symmetrically: each chamber represented a different place of worship. The biggest megalith is over 7 meters long and weights almost 20 tons. Some small rocks, used to place the megaliths, were found in the site too.
La Valletta Museum of Archaeology safeguards some artifacts found in the complex.
There is another archaeological site 500 meters far from Hagar Sim Temples, called Mnajdra Temple, located on a hollow on the Southern cliffs.