Palermo has 671.042 residents and it is the Sicilian Regional seats.

The city has a multi millennial history and it has a very important position in Mediterranean and European events. It was founded by the Phoenicians between the VII and the VI century b. C. and it was conquered by Romans in 254 b. C., becoming the main city in the Sicily.  In 429 was under Vandal domain, then in 536 under Byzantium and finally in 831 under Saracens. After the Normans and the coming back in Christianity, it was the city of king crowning and for this reason it was named “Prima Sedes, Corona Regis et Regni Caput”.
Between 1816 and 1817 was the Regno delle due Sicilie Seat and it became the second important city in it till 1861.
The long city history and the quick succession of different cultures and communities gave to it a considerable artistic and architectonic patrimony. The serial Arabian- Norman Palermo, Cefalù and Monreale Cathedral were declared UNESCO heritage. Many buildings are classified like Italian national monuments.
In Palermo there is the Sicilian regional Assembly, which is the more ancient parliament in the world and also an important university pole. Named young capital in 2017 and cultural capital in 2018. 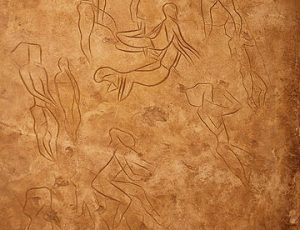 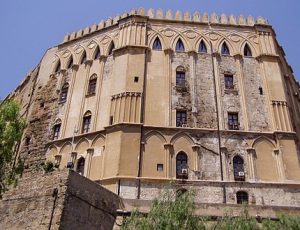 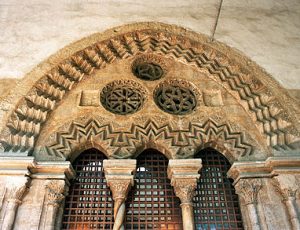 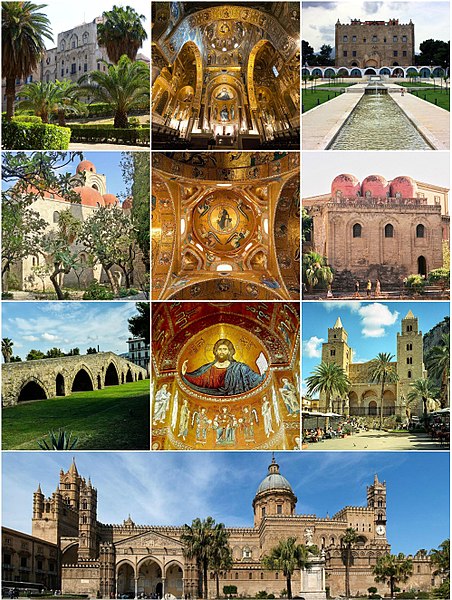 The Arabian-Norman residences, churches, Monreale and Cefalù cathedrals are UNESCO heritage since 3rd July 2015, together with the seven monuments like:

The Region asked to include: the Castello a Mare, the Cuba, the Cubala, the Maredolce Castle with the Favara Park, Santa Maria Maddalena church and Magione church.
to all these, we can add other architectural monuments, that are not in an official way UNESCO patrimony: the Cuba Soprana, included in Villa di Napoli, Santa Maria Incoronata Chapel, San Giovanni dei Lebbrosi, Vespri church, Santa Cristina la Vetere church, Uscibene Palace, Qanat and Cefalà Diana Bagni.

Palermo has several Norman monuments, classified like UNESCO heritage: in Norman Palace, which was Sicilian kings dwelling  and today Sicilian Parliament, we can find  sumptuous Palatina Chapel built in 1130, after the Ruggeri II crowning. This Chapel is the sum up of Latin architectural shapes, Byzantine mosaics and Islamic mugarnas, which are the high expression of Fatimid art. Next to the Norman Palace, we can observe the Saint Giovanni degli Eremiti church, with its famous red domes (they were designed in chromatic way during XIX century). We have to mention also the Martorana church, rich in mosaic decorations and in pure byzantine style, in Piazza Bellini and the San Giovanni dei Lebbrosi church, edified next to the Oreto river. 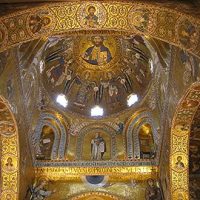 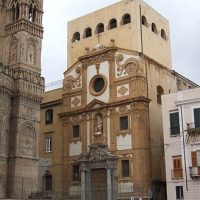 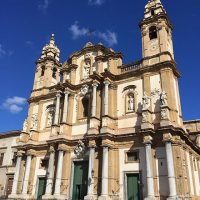 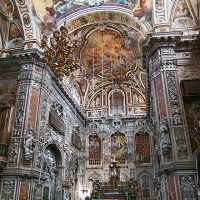 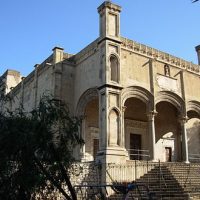 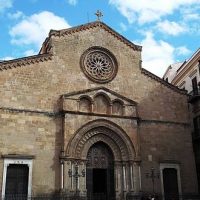 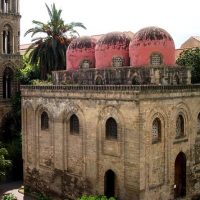 Very interesting is the Santa Rosalia Sanctuary in Pellegrino Mountain, which was built in 1626 where people found Santa Rosalia body, the city Protector. The sanctuary safeguards the memory about the prodigious finding of Santa Rosalia bones, discovered the 15th July 1624 thanks to Girolamo La Gattuta indications, who climbed in Pellegrino Mountain the 26th May 1624 just to release a vow and she had a double vision of the Holy Mary and Santa Rosalia, during that they indicated where to find the bones. The 13th February 1624, while the plague lashed Palermo, the young Vincenzo Bonelli, desperate for the died of his wife, decided to climb in Pellegrino Mountain to kill himself. Saved by the Saint, through a vision of her, she indicated to do a procession. so, the 9th June 1625, during the religious procession with the Saint relics, when people song the Te Deum Laudamus, the peste stopped and Palermo was saved. The palermitan Senate, just to thank the Saint, consecrated the sanctuary to her.

Monreale (Murriali or Muntriali in Sicilian language) is an Italian town of 39 024 inhabitants of the metropolitan city of Palermo in Sicily. It is the twenty-first most populous city in Sicily and is part of the metropolitan area of ​​Palermo. It is the archiepiscopal seat.
The most Monreale representative building is the Cathedral which was built always by William II, between 1172 and 1176. The style of this monument known and appreciated throughout the world is composite, because they combine different styles that refer to architecture of northern Europe and Arab art.
The two massive and solemn towers, flanking the entrance gate built in the XVIII century, don’t retain the original shape, since one of them was mutilated after a thunderbolt (1807).
The interior, illuminated by the magnificent gold-shimmering mosaics that create the illusion of being in a heavenly place, is in Latin cross, with aisles divided by columns surmounted by a rhythmic sequence of pointed arches.
The narration, which extends for a good 7584 m², tells the whole story of Christianity in expectation moments of Christ, till his earthly life and what happened after his death and resurrection.
One of the highest moments is stood for the image of Christ Pantocrator (in the apsidal basin) that seems to dominate the entire sacred hall.
It is also interesting the treasure, which is visible by the Chapel of the Crucifix, built in the Baroque period.
The cloister, another place of delights for the eyes and the heart, is a true masterpiece of the sculpture art and the inlay of semi-precious stones. The 228 twin columns, each of which has different decorations, are surmounted by elaborate capitals that support arcs of Arabic inspiration.
It is complementary to the construction of the Cathedral, has a quadrangular shape and encloses, in a little space, an entire sample of forms and cultures taken from Provençal, Burgundian art, from the classicism of the Salerno area and, as always in this area of ​​Sicily, from Arabic art. In the southern corner is the square enclosure with the high stem fountain, which evokes the shape of the palm tree trunk, and refers, with the delicacy of shapes and colors, to the magical and sensual atmospheres of oriental homes.