In an enchanted valley with almond trees in flower, we will find the main historical complex of Magna Grecia. Also there we will find the mixed charm of a cultural area created by humans and a natural landscape. Valle dei Templi is for sure the most important proof about the presence of classical culture there in Sicily, because it gathers all the God temples in Necropolis and the extra moenia shrine.

ERACLE TEMPLE (HERCULES) is the most ancient in Agrigento valley. He was the divinity venerate by the Akragants. Inside of it, there was an Hercules bronze statue, loved like national hero. The temple was destroyed by an heartquake and today we can admire only 8 columns of it.

CONCORDIA TEMPLE is located in the “via Sacra”. It was edified around the V century and today it is the best kept. In VI century became a holy building. Its name, Concordia comes from a Latin writing which was found near the temple.

Tempio della Concordia nella Valle dei Templi (Agrigento)
VULCANO TEMPLE, built in V century, it was a majestic building, even if today we have only a little part. On its base were found rests about a little archaic temple.

Il Tempio di Vulcano o Efesto nella Valle dei Templi (Agrigento)
TERONE TOMB, next to the Aura Door, is a majestic monument made up of tuff stone and in pyramidal shape. It was built just to remind the fallen during the second Punic war.

Il Tempio di Vulcano o Efesto nella Valle dei Templi (Agrigento)
ESCULAPIO TEMPLE was built outside the ancient city walls, where the sick person went in pilgrimage just to ask a healing. In fact, these walls were signed by these persons which obtained the healing.

Il tempio di Esculapio nella Valle dei Templi (Agrigento)
GIUNONE LACINIA TEMPLE is, like for Concordia Temple, a conventional name (it was confused with Hera temple in Crotone), but it is wonderful to think about that this temple, situated on a cliff on east side of the magic hill, it was the place for fertility rituals. The fire traces, remind the event in 406 b. C., when it was destroyed by Carthaginians with Concordia Temple. Inside of it, we can find a big altar for offerings and a portion street of City Door III, in which are evident many wrinkles cart. 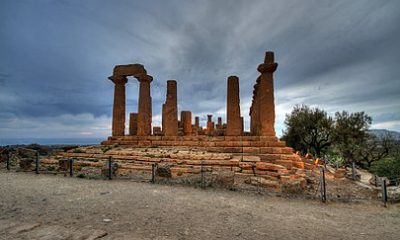 Il tempio di Giunone nella Valle dei Templi (Agrigento)
CASTORE AND POLLUCE TEMPLE (Dioscuri), the legendary twin born through Sparta Queen and Zeus union. It became the Agrigento symbol, but today we can admire only 4 columns of it.

ZEUS OLYMPIC TEMPLE was built just to thank you Zeus for the victory in 408 b. C. of Agrigento against Carthage. There, we can find the Telamoni, enormous statues with human resemblance.